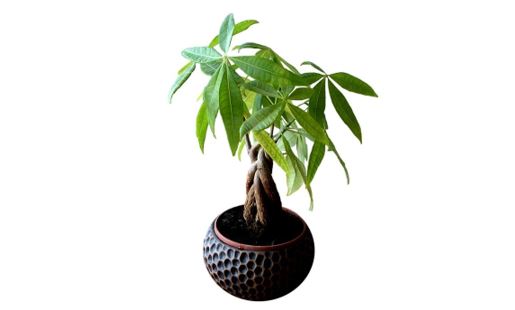 It is always awe-inspiring to uncover beautiful patterns in nature, so much so that a good part of people we hold accomplished spent their time trying to explain these patterns, building upon nature to, rather audaciously, quantify beauty.

However, one could argue that we have succeeded in harnessing beauty when in 1986 a truck driver decided to do the most obvious of things and braided the trunks of a plant which we now come to call the Money Tree.

It is so revered that the Japanese associate it with financial success and general good luck in terms of one’s resources, with a myth stating that once a poor man praying for money found this tree, taking it home because of its beautiful shape and ended up selling its seeds for profit.

It is the foremost ornament used to decorate financial buildings, like stock exchanges and banks in Japan, which arguably is a bit more palatable than the raging bull in Wall Street.

This minute change to a plant that bothered none brought the country of Taiwan immense financial success as the export of the plant became a booming industry.

We could argue about this rather confusing myth, as it is hard to imagine a poor man’s best opportunity in the post-1986 world be to sell seeds, however, Taiwan stands to the robustness of the myth.

For simplicity’s sake, let’s assume we got lost in the beauty of the magnificent braid and to pay homage to our accomplished ancestors who succeeded in defining beauty, we wanted it for ourselves. Here is how:

Firstly we will consider the requirements of the plant which have to stay the same throughout its existence.

These include the soil conditions for the plant, the amount of sunlight, and general rules regarding placing it in appropriate areas and the kinds of apparatus one should keep in place.

Money Tree is a very hardy plant as it’s found in many different places around the world from the land of the rising sun to the one where it sets, meaning it can survive in most conditions; however there are ideal conditions for a healthier plant.

The soil should be towards the loamier side, as the plant is occasionally watered and requires a little sunlight.

Loamy soil holds water for a long time and keeps the planted hydrated throughout its time in the sun and sufficiently enough to thrive in indirect light.

The soil should be mixed with sufficient compost so that it becomes nutrient-rich; generally mixture of 30% compost to 70% soil is used. The soil is thoroughly mixed with the compost and gains nutrients as well as the ability to turn dead leaves and organic matter into compost.

A small pot with proper drainage holes should be used for planting the seed as root rot is an important problem to tackle. The water should be held by the soil only; the pot should serve to immediately dispense the water from the soil to avoid over-watering which causes root rot.

The plant thrives on a mixture of indirect and direct sunlight, so it should be placed ideally around a place that can provide shade enough that the plant doesn’t move a lot, like a window, so when it’s rotated from indirect to direct light there are no adverse effects on the overall climate which could be detrimental for the plant.

A rotation of a week to two weeks should work wonders for the plant. Alternatively, the plant can be permanently placed under fluorescent light as well, however, sunlight is advisable.

The ideal temperature is around 25 to 30 degrees Celsius, however, if the temperature increases it’s important to water the plant sufficiently as the Money Tree grows ideally in humid climates. The plant should be sufficiently watered as the climate gets drier be it winter or summer.

In conclusion, the plant should be planted in compost-rich loamy soil in a small pot with drainage holes, placed around a window so it can be rotated between direct and indirect light without adverse effects to the climate, which should be ideally humid.

Secondly, we will focus on the ongoing actions one has to take throughout the existence of the plant to make sure the desired result is achieved and a healthier plant is grown. These include the provision of water, fertilizers, pesticides, and general pruning and cutting.

After the seed is planted in the proper conditions given above, the following guidelines should be considered to achieve the magnificent braid.

The plant should not be over-watered to avoid root rot; the general guideline is to water the plant when the soil and the drainage holes are dry.

Fertilizers for the Money Tree aren’t necessary as the compost-rich soil should have enough nutrients for the plant to grow, and watering the plant regularly should provide it with a way to distribute the proper nutrients throughout the plant.

Pesticides are not necessary if the plant is grown indoors, as the plant is very sturdy. However, outside the house, the plant can attract pests which should be dealt with by applying neem oil to the leaves and trunk of the plant.

The pests can eat at the leaves and trunks hindering the growth of a healthier trunk.

The most important part of the Money Tree is its pruning and cutting, as it makes the braid possible. As the plant grows and the trunk starts to show from the soil, it should be made sure that all dead leaves around the plant are cut and mixed in with the soil.

It makes it easier to work with the trunk and gives essential nutrients to the plant. Then tie the exposed trunks in a braid and tighten the braid with a string so as the trunk holds its place.

Be careful while using a string to tighten as the growing trunk could break, then as the trunk starts getting woody the strings can be taken off as the braid will take its shape.

There are indeed other ways to grow this plant, and for other purposes but this guide focuses on someone who would like to revel in the most human of things that are growing something and tending to it.

The plant can be grown from a branch of a previous plant, for someone who does not have access to seeds.

The plant can be grown through the hydroponic method, which is simply replacing soil with water, however intuitively the plant would require fertilization in that case, for someone trying something new or not wanting to create a mess.

As mentioned the plant does produce fruit in the form of nuts, and these nuts are usually grown in among others, mostly power stricken areas of Central and South America, used for different purposes from making flavourful hot drinks to rat poison.

However, the guide does not focus on the cultivation of these nuts for two reasons; including cultivation is mostly an industrial process contrasting with a means to creating a more aesthetically green area in your living space, and most importantly that the current research on the nuts suggest that it isn’t exactly safe for consumption.

Whether its financial success you yearn for or adore the beautiful trunk and the large leaves of the plant, this plant surely will be an important fixture of your household and as gardening goes, a very healthy hobby for your household as well.

All plants need care and diligent maintenance to grow successfully and Money Tree is not an exception.

One could argue that all plant and animal life thrive perfectly in forests and jungles so by natural selection it should thrive on its own after one completes the most human task of introducing a new species to an ecosystem, but as is it is mentioned above the braids of the money tree are a human intervention thus intervening in the process of growing the plant to achieve our desired goal is essential.

Finally, as someone who owns vines upon vines of this plant, we wish you immense financial success.