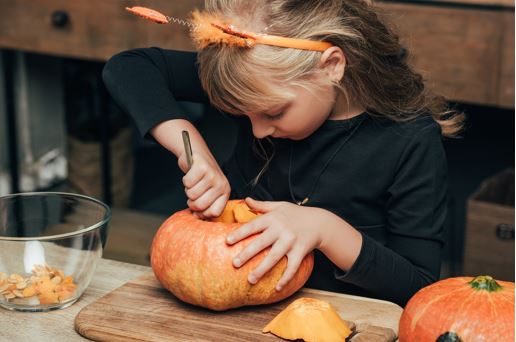 Carving Pumpkin is perhaps the most exciting activity that every kid looks forward to when Halloween comes. Halloween is not complete without creative and spooky jack-o lanterns on your front yard or porch.

Carving pumpkins is also a great way to spend time with the kids and allow them to express their creativity by making them decide what they want to carve in their pumpkin.

Other than the famous spooky monster pumpkin, you are absolutely free to carve whatever it is you want on your pumpkin. May it be a famous meme, a funny picture, or just about anything that your kids will love. Here are 12 creative pumpkin ideas for you to get started.

Every kid has their favorite cartoon character. Although doing this can be a little challenging to do as some characters might be a bit difficult to draw, it is something that your kid will appreciate.

Let the kids help in the process. Remind them that it doesn’t have to be perfect. The most important thing is they enjoyed carving it.

Planning of having several pumpkins to spruce up the spooky vibe in your front yard, do the emoji pumpkin. Emoji pumpkins are funnier than scary but they will nonetheless make your Halloween décor unique from the rest.

Cut a small part of the pumpkin into small triangular shapes for the ears. Do the same for a dog face and voila! Your pet pumpkins are ready!

Polka dot pumpkins are easier to carve since you only have to drill holes on the pumpkin and put a lamp inside to make it glow. This makes for a good décor especially if you’re into creating a much more aesthetic appeal rather than a spooky one.

Drill holes to form a pattern such as flowers, or a mixture of big and small dots to make it look interesting.

Are your kid’s space lovers? Then the pumpkin stars are for them. Stars are easy to carve so they won’t have difficulty in doing the carving. Make sure to guide them first on how to do it.

To make the pumpkin more appealing, they can carve planets, spaceships, and rockets. The starts should be big enough so the shape is clear to see even from afar.

There are a lot of simple Disney characters your kids can carve. Characters like Olaf from Frozen, Mike Wazowski from Monsters, Inc, and Nemo.

They can also do Mickey Mouse or if your kid is into Disney princesses, let them explore and carve their favorite characters as they like. The sky’s the limit with Disney characters so give them the freedom to choose and they’ll surely enjoy making it regardless of how challenging it is to carve the character.

A pumpkin house is one of the most creative and fun to carve Halloween pumpkins. You should pick a huge pumpkin in order to conveniently carve the house.

Carve as many windows as you can and let your kid decorate the house by putting miniature plants, animals, and other toys to make it look interesting. They can carve a spooky house with a little chimney on top or a hobbit house with circular doors and windows.

Ghost pumpkins are basically just three circles carved to form two eyes and a mouth in a scary form. It’s a good pumpkin carving idea for beginners because it is pretty easy to make.

You can choose a smiling ghost or a scary ghost just modify the shape of the mouth and add fangs or scary teeth for a spooky appeal.

Spider-Man movies are so popular these days. If your kids are avid Marvel fans, they will absolutely love a carved Marvel character on a pumpkin.

It’s easy to carve Spider-Man on a Pumpkin. All you have to do is to draw the shape of his eyes and carve it. Next, draw the spider web pattern around the eyes. Put a lamp inside and you now have a glowing spider-man eye jack-o lantern.

The magical realm of Harry Potter has captured the imaginations of many including kids and adults. The distinct costumes and character visualization of Harry Potter are its trademarks.

If you want to literally make the pumpkin throw up, there’s a science behind it. Look for a tutorial on YouTube on how to do it. But if you don’t want to make a lot of mess and simply have a sitting puking pumpkin on display, use the carved pumpkins as the puke by placing it on the mouth of the pumpkin.

Kids are excited when Halloween comes not just because they get to do trick or treat but because they also get some time to bond with their parents and friends. Make Halloween extra fun and creative by carving these amazing pumpkin ideas. Also, make it a fun and memorable experience for your kids. Use this time to spend time with them, teach them how to be creative, and have fun in the process of carving.

This website uses cookies to improve your experience while you navigate through the website. Out of these cookies, the cookies that are categorized as necessary are stored on your browser as they are essential for the working of basic functionalities of the website. We also use third-party cookies that help us analyze and understand how you use this website. These cookies will be stored in your browser only with your consent. You also have the option to opt-out of these cookies. But opting out of some of these cookies may have an effect on your browsing experience.
Necessary Always Enabled
Necessary cookies are absolutely essential for the website to function properly. This category only includes cookies that ensures basic functionalities and security features of the website. These cookies do not store any personal information.
Non Necessary
Any cookies that may not be particularly necessary for the website to function and is used specifically to collect user personal data via analytics, ads, other embedded contents are termed as non-necessary cookies. It is mandatory to procure user consent prior to running these cookies on your website.
Save & Accept